His voice sounds
like how whiskey tastes
dark and hot
making you forget
all your problems
with one look
or one sip
should you be
gracious enough
to handle what comes
with no chaser—
what girl wouldn’t
want the guy
who was able to
chase the monsters away,
being able to see
what fear looks like
and towards it
in something that
is all American muscle
because as we know:

the embodiment of
wishes and dreams,
In leather jackets
And glass green eyes
Hiding more
Than the mouth will
Ever say

given to us
over and over again
through John and Mary,
big brother to Sam, Cass, Jack & Adam
And the vessel of the
most fearsome Michael—
it is to him that we
owe restless nights
and quiet mornings
and to know that
whatever is in the closet
under the bed
Or watching
From outside
he’s got to go
through him first. 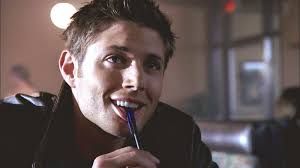 From the moment I saw Dean Winchester in his leather jacket, forest green eyes, and driving that 1967 Black/Black Chevrolet Impala? He had me.

I remember watching the Route 666 episode in Season 1 and was thrilled. Why? I called my best friend DiAndra at work and screamed this in the phone:

I remember she had no idea what I was talking about, until she remembered that it was Thursday–and who Dean was. Who is Chocolate you ask? Oh, that was the girl he proposed to–Callie. She was Black. Even now, I sniggle hardcore when I hear uber confident Beckys sound in the belief that White men don’t like Black girls. And when they reconnected on that episode? Chile, lookahere. You couldn’t tell me Callie’s back wasn’t broken and her legs didn’t wobble. Why is that? I would have worn that green-eyed monster out!

Dean has BDE. Look it up. Let’s move on…

I have seen his character go from this slick, boyish–slut (I mean let’s be honest! Dean has a body count like an assassin on him), to this sentient, compassionate man. As a fan of his, as he is (one of ) the husband of my imagination–to an evercrush. I’m always going to be a Dean girl. And ergo, a fan of Jensen Ackles:  now a married man, and father of three. Yes, I follow him on Instagram. When I saw him shave his hiatus beard for this last season?

I whistled. Yes, I did. The old boy still has it.

With the Supernatural series coming to an end after 15 years, I had to think about the life I have lived parallel to it. I got married and divorced. Became a mother, twice over. I lost my grandmother, got remarried, started writing again, all while battling depression. Dean and Sam were the highlights of my week sometimes, and it feels right to say good-bye to him. These fifteen seasons feel right.

As a Black girl that loves a good story and boyish charm, I can let him ago. At least for a little while. There’s still binging to do on Netflix.

Click here for a fan video that only seems as gift now.

Jensen Ross Ackles is a gift. He is the first man I ever saw without a shirt (Eric Roman Brady, Days Of Our Lives–I was 15). And seeing him as Jason Teague (Smallville) and that stint he had on Dawson’s Creek–I was thrilled to see him Supernatural. It was my crush on him that got me over being in love with someone else.

The top image is from Season 1 of Supernatural. And is one of my first favorite pictures of Dean/ Jensen.

Thank you to all the actors, directors, writers, set designers, editors, PAs, researchers, copywriters and all other staff that made this show possible. Thank you.

When I heard the boys (Misha, Jensen and Jared) on Facebook announcing the badass ride of Supernatural was ending this season, I was shocked. Now, I know all good things must come to and end. I get that. The magic that is Eric Kripke and Sera Gamble had to end one day. However, as a girl that grew up on horror/dark literature, in some form or another, I am sad.

Dude, I remember when the pilot aired! It was 2014, and I was 22, not even 23 yet. I remember that I thought the show would be awesome. I was dating a dude that would become my first husband, yet in love with someone else (No, look at the Able Unshakeable on The Ideal Firestarter for more of that saga). However, I had a raging crush on the treat that is Jensen. Oh, shug, Jensen and I go waaaay back!

While he was on Days of Our Lives as Eric Roman Brady (whew, Lawd!) he was the first man I had seen without a shirt. I was 15. I followed him through Days, Smallville, and those awkward haircuts and clothes on Dawson’s Creek. Bruh. I was a fan. And there was no way that I was going to miss him on this show! I had resigned that I was going to love it, because if he was in it?! I was going to be good–that was a foregone conclusion!

But there was something about this creepy little show on theCW. Keep in mind, I like horror as a genre. I don’t really like or do gory stories. I like how stylish the promos looked. And Jensen was in it? Oh, yes please. From the pilot, Season 1, Episode one. I was hooked. And I’m a car girl at heart? Yes! That 1967 Chevy Impala was everything. I told my then boyfriend/now ex-husband, that I wanted that car as wedding present. As a side note:  Jensen made me forget all about the Able Unshakeable. But that’s a story for a later date.

From demons and rock salt, to being vessels for Lucifer and the Archangel Michael,  to time travel, Sam and Dean Winchester have been a part of pop culture for almost twenty years! Get into that! To have them gone? That’s bizarre! I used to watch this show with a friend of mine, and the day I watched Route 666, I called her at work. When she picked up, I screamed this in her phone: “Dean likes chocolate!”

Yes, Dean had a Black girlfriend. Dean knows about this Black Girl Magic. If you been watching you know and knew that! But let’s keep it moving. Could seasons be infuriating, yes. Did it sometimes feel like you were playing an RPG and getting sucked into the side quests all the time? Did I get mad and stop watching for a while? Yes. Bruh, I was such a fan that I didn’t work on nights it aired!

But, I loved the writing. I love the depth. I loved the stories. I loved the world that Eric Kripke made and maintained. I looked forward to the show because sometimes I had to look up what they were fighting or the lore they were using. I loved the show. It made you think. It made you root for them. I cried when I found out that it was Mary who was the hunter, not John. I lamented for Sam that went through so much after he lost Jessica. I was made that Dean was a total slut for a while (did you not see Seasons 3 and 4!).

But it was always the story. Always the story. Once this show is gone, then what? I know there is AHS, and that is amazing. But this show? This one? With the diversity of music, people (where Black folk just ain’t props! And Sterling K. Brown was on in Season 2, never forget!). I mean, it was good! I remember fretting when the rumors started that show might be cancelled after 3 seasons! No lie, I loved when I was this underground show that not everyone watched. I loved that it was a secret of sorts.

Now, having to say good-bye to my boys? That’s tough. But, as ever the fangirl, I’m going to watch Season 15 to the end. I have to see how it all ends. It is rumor to air in October which is kinda tradition; it normally airs before Halloween. But, this one hurts the dark leaning, lusting fan girl in me. There is still nothing sexier than Dean Winchester wielding a firearm. Don’t debate me. This is never up for discussion.

Get ready, loves! You know the rules by now. Driver picks the music; passenger shuts his cakehole.

Note: Thank you, Carver Edlund for sharing Sam and Dean with is. Yes, he made the cameo as Chuck the Prophet.