I don’t know how long this process was in the works, but I in my Katt Williams voice, this is check and checkmate. Prince Harry of Windsor, the Duke of Sussex–with his wife, Meghan Markle, Duchess of Sussex, have ‘stepped back’ from their royal duties. Allow me to translate:  “I am leaving as soon as possible.”

But the thing that I find most amazing is how it was done. Am I mad about this? No, not at all. But I wrote last year, how I was praying for Meghan and Prince Harry.  How I hoped, how I prayed that as formal, as unrelenting as a platform as being a British royal would be, that Prince Harry protect her.

The thing that most Black women are not afforded full privilege of! I remember how I got up and watched the wedding, and how gorgeous she looked, how happy Prince Harry looked–and yet, all of me that is Black and mother, remained coiled. All I could think is, “Don’t let them get her, Harry. Don’t let them get her.”

From the press imagining this feud between her and the Duchess of Windsor (Kate Middleton), like they are Fergie and Diana reincarnated, to Prince Harry having to rise up on people that were coming for her, and the coup de gras? Some idiot on Twitter calling Baby Archie a ‘monkey’.

What I need y’all to know is, as woman, as a mother, as a person who occupies that intersection as one whom is Black? It is a miracle that Meghan didn’t burn something down! It is a testament of her grace, and the morality instilled in her that she didn’t become the stereotype of what the world thinks Black women can only be. The glorious thing:  my prayer was answered. Prince Harry protected his wife–with all power he could muster.

But what I think is so amazing is how shook the world seems to be by their decision! Some men won’t defend their wives and girlfriends to the people at their jobs or crazy family members! So, the world is shook that he didn’t want his wife–HIS WIFE–to be exposed to the same toxicity which contributed to his own mother’s unhappiness? Be for real, y’all. Be for real.

Herein lies the problem:  the world expects Black women to just take that type of abuse because that’s just what we do. Black women are seen as tragically loving mammies whom desire only to serve others. To die in pain with smiles on our faces–like Georgina in GET OUT. But the brilliant Zora Neale Hurston said this, “If you are silent about your pain, they will kill you and say you enjoyed it.” As I continue to live and learn, this quote manifests its truth on a daily basis.

In inhabiting this Black woman body, in encountering the slings and arrows of outrageous fortune while inhabiting it,  I have come to three conclusions.

1.) White supremacy tells those that follow it that Black people, Black women, are props. We are to be confronted, controlled, and herded to the pasture of a master narrative.

2.) It scares some white folk when Black women don’t just smile and nod.

3.) In asserting any power over self as a Black woman, you have to be willing to go against what folk want  you to do.

The world wanted Meghan to take her Blackness, or half-Blackness with her–and leave Prince Harry; restore him pristine to be made lily white again. The world that hated Meghan–and perhaps hates her more now–wanted her gone, to reclaim Prince Harry. How dare they–how dare she–become, remain sentient, poised and leave where she was not respected?

How dare she refute all tricks and traps to be controlled by and in a world which only wanted to curse her to her face; devour her behind her back?

How dare Prince Harry do what was mentioned in the movie Belle:  ‘wed the exotic’?

And how dare they plot to leave a platform which is quickly becoming archaic? Add to the fact they see mixed in with the people whom disliked his mother on the best days, and served her avarice as ice on the the worst ones!

I am proud of Meghan.

I am proud of Harry.

I am relieved for Archie.

The joke around the internet is on their tour of North America and Canada, they visited her mother. In being in that space, where there was love being served they couldn’t go back to where there was none. I like to believe that is so. I like to believe that in speaking to her mother, as all Black girls do when life is heavy and dark, she was able to just be Rachel again. Not the world famous/infamous Meghan Markle.

Maybe she was able to emote. She could cry. She could be listened to–and she could plan. I mean the Windsors have a sorted history anyway! Exhibit A:  King Edward whom abdicated for Wallis Simpson, the twice-divorced American; not to mention he was anti-Semite and Nazi sympathizer! Never forget, Prince Harry’s father, Prince Charles, married the woman he cheated on Harry’s mother for!

Meghan decided to leave a place where they both were unhappy, to make their way in the world together. Isn’t that what any parent wants for their children? The thing is, no one expected Harry to follow her. No one thought this Black girl from California–with the Black Mama with the nose ring and locks–would be able to pull a Prince from the gilded cage of money and privilege! But, she did. They did. And why not? 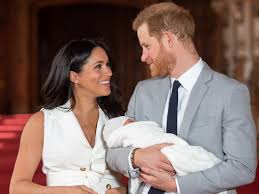 It is glorious to see her still retain all of who she is. I think Princess Diana would have liked Meghan. And I think, she would have told her to leave as well. Remember my dear ones, love is action and power. When harnessed together, it is a force of tremendous good. Besides, the world needs to see Black women own their own space, being intolerant of mistreatment. And if need be an necessary, get all your stuff, and leave towards something greater. The age of the Happy Mammie is over.

*Special thanks to Hannah Drake of Write Some Shit who reminded me to weigh in. Love you, Ma’am.